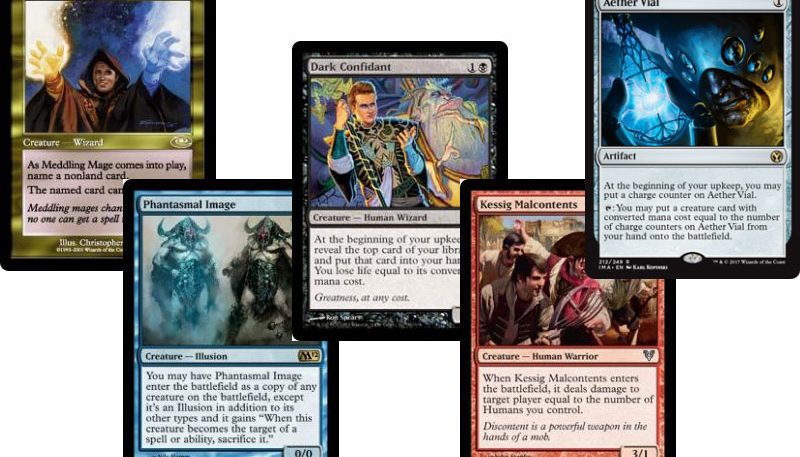 Today, we discuss the Modern Magic tricks. As we all knew that Modern magic has the ability to shine, through the tons of deck or the diverse Metagame, it seems like perfect harmony. Generally, you know the feeling like what are the Hallow one. It’s quite a realistic thing for Magic.

However, it is true not a joke that the Modern deck is the perfect way of showing Magic tricks. If the things are un-banned, then nothing will seem like really oppressive or overpowered. Now I am discussing my favorite deck:

In the Modern Metagame, there is a big appearance that makes the forefront for Humans, while dominating with the help of Collins Mullen as well as SCH Open. The first place of humans by the Collins Mullen occurred on 22 October 2017. In which 36 creatures, 4 spells, and 20 Lands are included. In the sideboard 2 Ethersworn Canonist, 1 Mirran Crusader, 2 Fiend Hunter, 2 Vithian Renegades, 2 Fiend Hunter, 2 IzzetStaticaster, 1 Reflector Mage and 1 Anafenza, the Foremost are included.

Humans are the disruptive and the most versatile aggro deck. Before using, it is important to figure out Modern Metagame. Possibly, you can cover all the things with Sin Collector as well as the Kitesail Freebooter. To clear the attacker path, you can distribute Hostage Taker and the Reflector Mage. When you use the Meddling Mage combo with the nut off cards like Kitesail then you can make the harder spell. With the Champion of the Parish, your opponent is finished with Mantis Rider.

Instead of all these aspects, you can really tie to make the lovely deck. The Aether Vial is the heart according to the deck point of view. This deck provides the battlefield creatures for counters the equivalent amount.

You will get the advantages if you work with the five color deck. Unlike the other tribe, there is no theme to follow that really shows a versatile Human tribe. The best part is you can work with the different tribe. There is a huge card pool in the Human deck. Additionally, there are different types of creature that has one end printed creature.

It clearly seems that the existence of the 5 Color Human Deck has changed. Phantasmal Image.is one of the biggest addition. After Open in Cincinnati, the existence of Modern Metagame. Essentially, some player decided that it become the best idea of having 8 Mantris Rider. If we look back, then we definitely know the value of choosing the best deck.

Meanwhile, in the deck, players always enter for Humans because of phantasmal Image. By default, Humans are not essentially creature because there is no flexible copy. You can overcome the matchups with the help of different tools. Just like I mentioned above, a player will get 5 color deck for consistently play but doing so, they’re having some problem. Additionally, the deck comes with some improved matchups such as the Kessig Malcontents or Dark Confidant.

In the card draw engine, the bob comes with a threat. Generally, he warrants for threatens or instant removal, so it could be easy that you use Human in a bad situation. It is relatively faster when you empty the deck in the hand and this thing really helpful when you choose Dark Confidant.  Just be careful, because the extra cards always come with high expense result.

Simply, we can say that the game-ender is only Kessig Malcontents. You can catch your opponents when you are playing correctly. When the opponents are off guard then there is no complication for choosing the favor of Humans.

When the board becomes stalled or mucky then this card can try as the outrage. If you think that the A 3/1 body is the most appealing body, then you are totally wrong here.  It makes the closing speed because there is a lack of cards. In the last chance of playing, your opponents have the chance to use the advantages, when you are active. With the help of Meddling Mage, you can easily play by locking your opponent. In short, rather than others, the Meddling Mage is great.