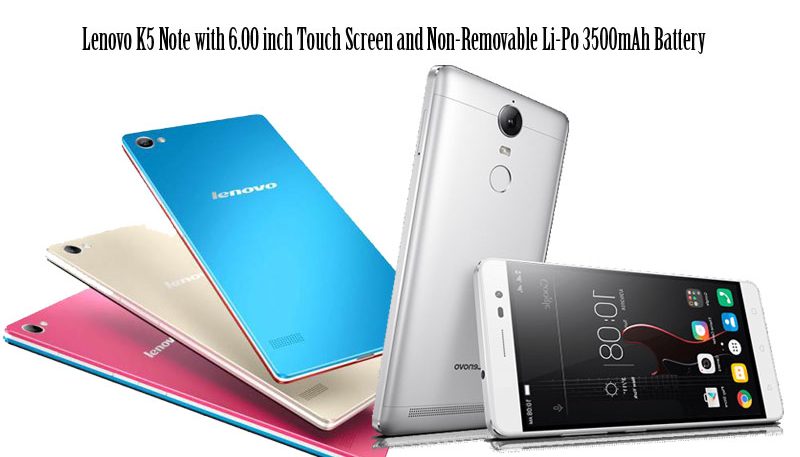 Lenovo Company is very active in introducing its new inventions all the time. After improving its recently launched device K4 Note, Lenovo has launched its new K-series smartphone in June 2018 i.e., Lenovo K5 Note.This devicehas a complete metal body of 8.5mm thickness and 176g weight. The Lenovo K5 Note has 6.0inches IPS LCD capacitive touchscreen with 16M colors. The handset resolution is 720 x 1440 pixels with aspectratio of 18:9. It is powered by 64-bit octa-core 1.8 GHz Cortex-A53 processorwith MediaTek MT6755 Helio P10 chipset coupled with Mali-T860 MP2 GPU. In terms of storage, the phone comes in two variants, 3GB/4GB RAM and the internal storage with 32GB/64GB along with memory card slot that can be used to expand the storage. Moreover, the phone comes in three attractive colors: Gold, grey and black.

Lenovo K5 Note offers support for Dual SIM slots i.e., 4G LTE and VoLTE along with rear mounted Fingerprint sensors at the back that is used for capturing images as well as for making payments. Its connectivity option also includes Wifi, hotspot, Bluetooth 4.2, GPS, micro USB port, 3.5mm audio port and GLONASS.  It packs in a non-removable battery of 3760mAhthat has approximately 2 day life with useand runs on Android 8.1 Oreo operating system.

Two Virtual Phones within One Device

The biggest feature of Lenovo K5 Note is that it offers two separate virtual phones within one device. Now you can sign in through your personal account as well as your official account at the same time with the same phone. Moreover, you can run two instances of any app including WhatApp. Don’t worry you will not miss any notifications from either account. Other than this, one more quality of this phone is of double-tap to zoom into whatever is on screen. People with weak eyesight will be grateful to this feature.

Although Lenovo K5 note is a decent and good option but it has some issues that are listed here.

Both Xiaomi and Lenovo are the Chinese company but Xiaomi comes at 4th position in the Global Smartphone Marketshare while Lenovo is ranked at 8th. When we compare Lenovo K5 Note withXiaomiRedmi Note 5, we found out that XiaomiRedmi Note 5 is better. It has 11% faster CPU and 8% bigger screen than K5 Note. These features make it faster and attractive.In case of camera, Redmi Note 5 has 12% more pixels than K5, so it has more resolution which gives sharper images. Moreover, Redmi Note 5 has front camera flash too which allows to take better selfie even in low light.