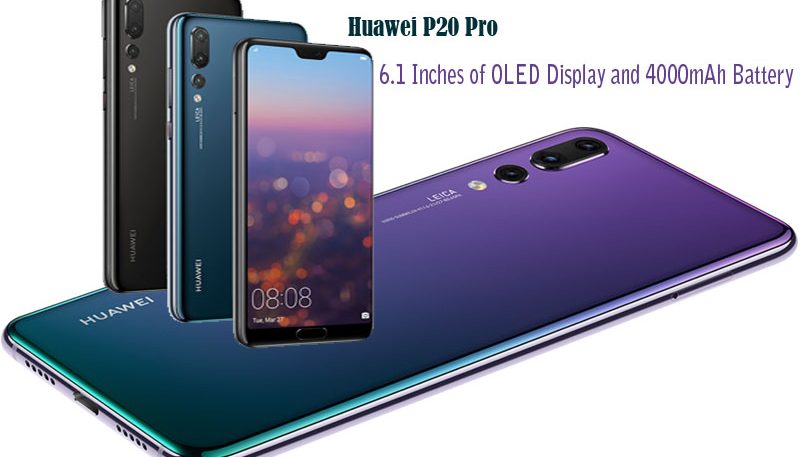 Globally recognized, the world’s third-largest smartphone maker, China’s Huawei Technologies is a serious contender for Apple and Samsung. From Huawei P9, Huawei P8 and Huawei P10 to more refined formula and attractive design of the great Mate 10 Pro, this company has raised a lot. But the latest invention of Huawei P20 Pro has moved the company’s smartphone game to the heights. Its great design with the eye-catching twilight color scheme, highly attractive triple camera flagship, long lasting battery and fast performance with superb build quality make it the best of all.

Huawei P20 Pro triple camera flagship is a combination of innovative three lens camera containing a 40-megapixel main RGB color lens, 8-megapixel secondary telephoto lens and a third 20-megapixel monochrome lens including a laser transmitter and also a receiver for the autofocus system, with a flash unit of brand new color temperature sensors. Its pixel fusion technology brings four times the amount of light into a pixel which creates brighter photos and allows all three lenses to work together which gives a great image sharpness.

This phone takes amazing daytime shots, real monochrome pictures, sublime night time pictures without a tripod and the best zoom into a particular way closer than any other camera can.Moreover, it can play everything from the slow-motion video with perfect quality to portrait shots and bokeh-style images. We can say that it is not only a smartphone; it is a proper professional camera as well. Due to all these great features and smart processing this smartphone is giving a huge competition to iPhone X and Google Pixel 2.

To enjoy the most from the triple flagship camera, the Huawei has designed this smartphone to look best in a landscape orientation. Its glass body has curving into metal chassis and shows extremely beautiful twilight colors here.

There is a notch on the front at the top of the 6.1-inch OLED screen just like the iPhone X but here it is not for any purpose. It is just a design. A fingerprint sensor is present at the opposite end of the screen which is quite low in position, but it is really fast. Mostly the fingerprint sensor seems unused because of P20 Pro’s Face Unlock. Though it is not that much secure as it is in the iPhone X because just a glance in the phone’s direction unlocks it instantly.

Huawei P20 Pro has an Android 8.1 Oreo installed with the new security update of March 2018. Moreover, it owns the EMUI 8.1 user interface placed on the top. It doesn’t warn about the power consuming apps anymore. Multiple home screens carry all the apps but there is also an option to add an app drawer if anyone like. Its setting menu is also different from Google Pixel 2.

Both Huawei P20 and P20 Pro have an attractive and smart combination of cutting-edge hardware and software, but still, hold a big difference between them. Some of these specifications are given here to illustrate the differences.

Both smartphones own Kirin 970 processor with a special Neural Processing Unit (NPU) that is designed to offer all artificial intelligence (A.I.) enhancements without reducing the speed or using too much battery life. But the camera, RAM and the battery life difference makes P20 Pro more captivating as it has triple lens camera, 6GB RAM and 4000mAh battery, while P20 camera carries a combination of only two lenses (12megapixel primary lens with a 20-megapixel monochromatic lens), 4GB RAM and 3400mAh battery.

Why Huawei P20 Pro is Banned in the USA?

As Huawei is a Chinese company, not only Huawei P20 Pro, instead all the Huawei smartphones are banned in the U.S. because of some security issue. These devices are being told as a threat to national security. As if someone owns any Huawei smartphone, all the personal and private information will be monitored and stored by the secret operation present on another continent, but there is no proof. Huawei phones are being sold all over the world without any such type of incident. Americans are missing the best Android phones in the world.

Assassin’s Creed Odyssey Download for PC Highly Compressed
Next Post
What are the Products of the Calvin Cycle in Photosynthesis?