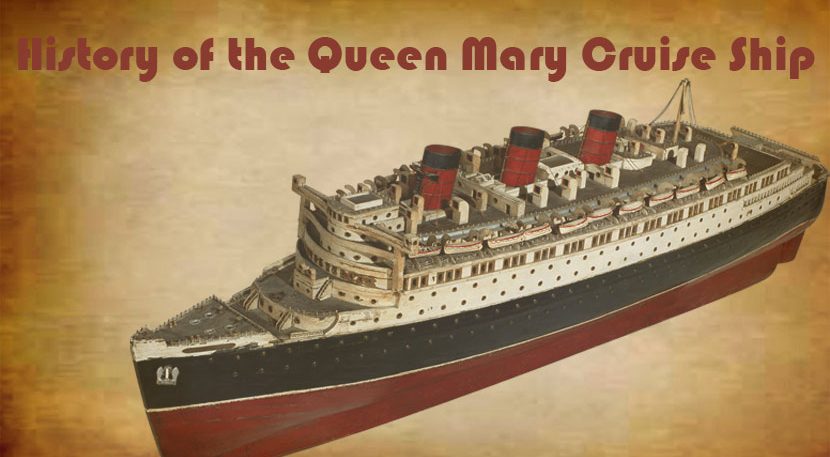 Titanic, a name we all have heard and also a film we all have watched at least once in our life. It was 882 feet and 9 inches long which had a maximum breadth of 92 feet and 6 inches. Similarly, if we talk about the height of Titanic from bottom and all the way to its peak, it measured 104 feet. At the same time which leaves you jaw dropped is the fact that it had the weight which measured 46,328 tons. Keeping this in mind, whenever you are about to hear the name “Titanic”, you know this is some real deal. You might consider mentioning of Titanic a matter of irrelevance and a bridge for filling a word count, however there is a significant relevance.

As in the honor of Queen Mary Ship’s introduction, we must state that the ship is two times larger than Titanic, docked at sightful location of Long Beach, California since 1965 when it was sold to the state, and now serves as a floating hotel.

As we speak about the Queen Mary Ship History, it was completed in the year 1930 whereas its inaugural Voyage occurred on 27th of May, 1936. Its inaugural voyage delighted its passengers with two swimming pools, two cocktail bars along with a grand ball room, five dining areas and lounges, leaving its passengers astonished, as it was much more to be discovered rather than just what’s mentioned. All the glory and the luxurious pride lasted until beginning of World War II, where the Queen Mary was painted Gray. Although glory came to its end, but performance of the ship only had begun. Queen Mary’s speed was single-handedly dominating the performance and the speed of enemy’s boats. It carried over 800,000 servicemen throughout the clash of world powers. Only thing that changes then and there was the nickname of the ship, it was nicknamed “The Gray Ghost”.

Times change, and as the time changed in the year 1947 when “The Grey Ghost” reverted to its status “Queen Marry Ship”.

As you might wonder about “The Grey Ghost” and what was the purpose behind such a nickname, it was not then, when the haunted experiences made their mark on the board. Surprisingly enough, there was a large number of deaths, which were recorded due to or in to, the ship we know as “Queen Marry”.

Why is the Queen Mary Ship haunted?

There has never been a close and most definitive reason for a “Haunting” quality of an object or a subject. However, there is a factor which plays an important role and can be considered when we mention the “Haunts” of the great Queen Marry, that it has played a direct and an indirect role in numerous Deaths. They either occurred in the ship, or by the ship just like what happened in the year 1942, it was the month of October when the ship was being escorted by Another Ship, which was known as “HMS Curacoa”, when Queen Mary crashed the 20 times smaller ship accidentally. A conclusion drawn because of the set of deaths, to claim the residing horrors of Queen Mary.

The Most Haunted About Queen Mary

Famous haunted room, Queen Marry Ship B340 is where the great commodore himself, the man whose name is Everette Hoard, had experiences such as his body in vertigo when he enters in the room. This room is equipped by the material, which is said to be a gateway to another world.

Rather we should say, means of communication with the ghostly spirits are arranged and made available to the visitorsof the ship. These means of communication include tarot cards, a crystal ball and Ouji board. There is also an inscription facilitated by the management to have your communication gap with another world fully gaped and filled, ensuring the fulfillment of the gap you might experience when you finally gain control over yourrushing nerves and make a decision to have a little chit chat with the residents of another world, usually unseen and left unheard.

Just after your spine has experienced the chills that might have shivered your nervous system at the max, here awaits the good news to calm you down a little. The room B340 is upgraded and has new carpet, television and a service of Wi-Fi as well.

How to Make a Long Distance Relationship Works?
Next Post
History of Queen Elizabeth the First of England