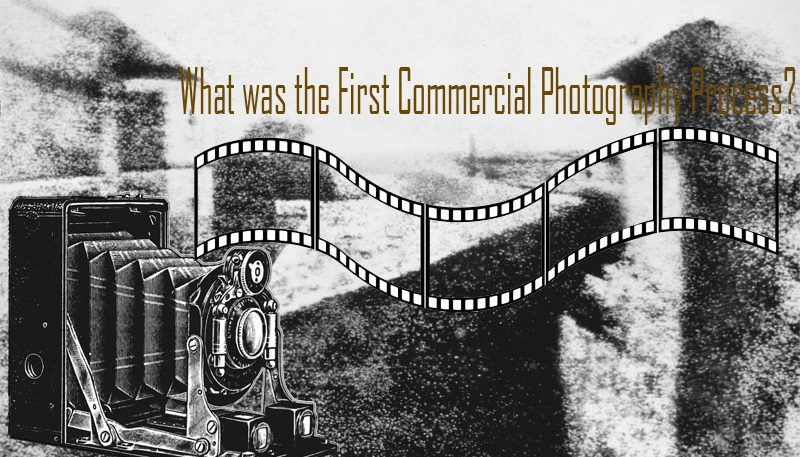 What was the First Commercial Photography Process?

The term, photography is derived from the Greek where photos mean “light” and graph means “to draw”. It was the first time used in the 1830s.

“It is the process of capturing an amount of light during a given moment on a light-sensitive material”.

The experimental groundwork of photography was laid down in the beginnings of 1820. However, the practical photographic process was executed in 1839 after the introduction of the bewildering proliferation of photographic process. During the first half-century, many different photography processes were introduced which were the fusion of technical and artistic photography with equal merits and demerits they contributed to the remarkable diversity of nineteenth-century photography. The following article will illustrate only a few of the most significant of these.

Louis-Jacques-Mande Daguerre was a professional scene painter for the theater. In Paris (1839), the daguerreotype was the first publicly available photography process.  The Daguerre image was formed on the plate of ionized silver that was later developed and made visible by exposure to mercury vapor, which was settled on the exposed part of the image.

Drawback: The results were not permanent and even when the developed picture was exposed to light, the unexposed areas of silver darkened until the picture was no longer available.

Way out: by the end of 1837 Daguerre was able to fix the image permanently by using a solution of table salt to dissolve the unexposed silver iodide.

Innovation: on September (1840), while experimenting with Gallic acid, Talbot discovered that the acid could be used to develop a latent image. The latent image thus produced was then developed in Gallo-nitrate of silver and then fixed. Talbot named his improved negative process as calotype which is a Greek term and mean “beautiful picture”.

Merits: the calotype negative was a big hit in the 1840s and 50s and it became a common practice for photographers to apply heated wax to the developed negative in order to amplify the printing transparency and this practice lessens the visibility of the paper fibers.

Frederick Scott Archer’s wet collodion process was developed in 1851. From the mid-1850s until the early 1880s it became the standard photographic negative process for both amateurs and professionals.

Innovation: a sheet of glass was coated with a solution of iodized collodion (a syrupy liquid which is composed of soluble gun-cotton, ether, and alcohol) and afterward it made light sensitive by immersing it in a bath of silver nitrate. The whole process is known as a wet process because the glass negative required sensitizing, exposing, and processing while the chemicals were still damp.

History: when William Henry fox devised a printing system which would produce photographic reproductions in ink. Talbots termed his process as “photoglyphic engraving”.

Innovation: when a photographic image was transferred onto a grained copper plate, which was then etched to depths corresponded to the shadows and highlights of the original. The resulting image was then used as a printing plate in the normal way.

Merits: photogravure is a photo-mechanical rather than a true photographic printing process and it is still in use for high quality monochrome reproduction.

History: It is one of the oldest and longest surviving photographic processes. It was invented by Sir John Hershel (1840), named as cyanotype or blueprint.

Innovation: when ferric ammonium citrate was fused with potassium ferricyanide a light-sensitive paper was produced.

Merits: among others, it is a relatively simple process to prepare and manipulate and require neither development nor fixing other than washing. This photographic process has been widely used by engineers and architects for reproducing technical arts also called blueprints.

What is Management Consulting really like?
Next Post
How to Write a Synthesis Essay Step By Step? by CIS