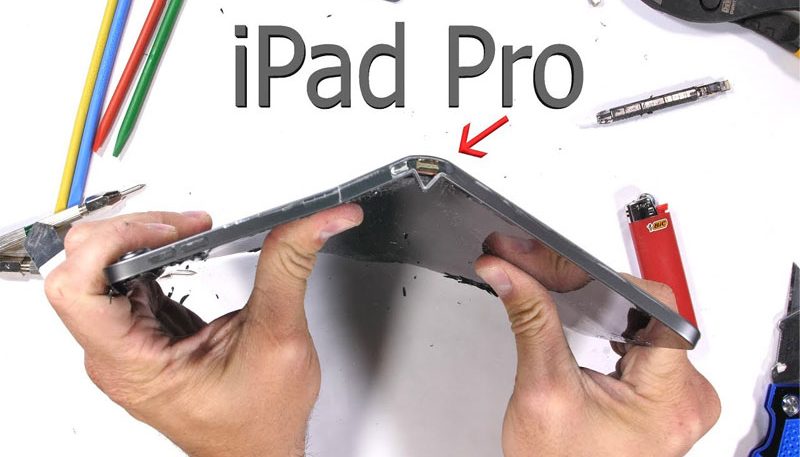 JerryRigEverything just made a video about Apple’s latest iPad Pro and he shatters the product just as easily as he shattered Apple’s reputation. When a youtuber with over 2.8 Million subscribers manages to shatter a whole iPad with not even a hammer but with just a pair of hands, you know you are in for a big one! The iPad was easily bent in half without much exertion. Zack Nelson is known for testing hyped products with his signature bend test and the new iPad Pro was to no exemption. The tablet crumbled to bits in a matter of seconds when Zack gave it a slight bend. The soft spot seems to lie in between the tab’s microphone hole on the left and the pencil charging unit on the right.

Tablet devices have been getting bad reviews from plenty of users and bloggers based largely on the structural integrity of the product. There have been complaints about the iPad Pro giving in to bends and deterioration within the first day of use or after being carried around in a backpack. There were some users complaining about how the product came a little bent out of the box itself.

Tablets are never as rigid:

All said and done, I’m going to give the iPad Pro a little benefit of the doubt since the video did demonstrate a rather cruel version on the durability tests a delicate device like the iPad Pro is meant to sustain. The device is a premium product retailing at $599 and is meant to be treated with care. The 11-inch model in my custody has rather worked perfectly fine since I first purchased it and I have been carrying it around with me  where ever I go. Of course, I make sure I’m not pressing in on it or abusing the product in any way. Lets just say, a little care goes a long way with the iPad Pro. You will break it if you are trying to break it.

It goes the same for all the tablet devices found in the market be it Apple, Lenovo or Samsung; if you will abuse the product, it will surely dismantle. Take note that a tablet is far less resilient than a phone. This is because phones are meant to be placed in pockets and will endure a little slipping off your hand but a Tablet is meant to give you a much restricted experience. You cannot toss around a tablet like you would toss your phone.

Zack Nelson’s review at the end of it came across being bit too biased and by the looks of it, he seemed to be going in at crumbling down the body of the product with not a single second spared to the software inside it, the virtual features the tablet comes with and the impeccable interface it is integrated with. The Spider Man part was just poor, in all honesty. Even a toddler knows better, both in terms of drawing a Spider Man and on how to handle a tablet.

So we come to the conclusion that iPad Pro is totally worth the buy if you are going to be the average careful user. A little casing will give your device all the protection it needs and the Smart Keyboard Folio and Smart Folio available at  Apple are a good choice. Nonetheless, the four corners would still be exposed. Lets just say you will have to do a little more digging at finding the perfect case.

Zack Nelson at JerryRigEverything seems to have a strange negativity towards Apple this time around but it is all in good faith I suppose. There have been times he has rather recommended Apple products in plenty of videos in the past, so let’s just call it a day on this one.